Everyone is talking about agile software development – we are also committed to the agile manifesto. In close exchange with our customers and through the experience which we gain in our projects, we continuously develop YUNA in short four-week sprints – or sometimes in shorter cycles. A nice sign, especially in times of Corona, when the team plays together so well and manages to follow the self-imposed roadmap! In the new version several features have been added and improved. In addition, we are constantly working on a better overall performance.

Notice of missing selection in widgets

For categories filters, you can now select the entire range between two different values by pressing a key.

A script alone does not make a commercial success – there are several factors that need to be considered – organizational as well as technical and these multiply with the number of scripts or analyses to be performed.

With the new version, we have eliminated various steps so that analyses can be put into production more quickly.
For example, changes are applied directly when an analysis job is created and no longer need to be confirmed. Also, it is no longer mandatory to leave a comment when switching between the individual steps of the workflow. However, this possibility has not been completely eliminated, but is offered as an optional function through an additional button. To guarantee tracking, all process steps are still logged.
While it was previously important to confirm each step in productive environments, it is now possible to implement the release (and thus the actual execution) with just one click. This allows experienced users to reach their goal with significantly fewer clicks and to go through the job manager in just three steps.

One of the core features of YUNA is custom dashboard creation. YUNA does not ship rigid interfaces, but offers users the ability to customize them to their own requirements – both visually and functionally. Unlike other solutions, the elements in YUNA dashboards also have exploratory and not just display functions.

In addition, the dashboard elements are based on the rights-role concept. A single dashboard can therefore take on a different display form depending on the user group – tailored precisely to the respective needs and without having to set up separate or even exclusive dashboards for each group.
For full customization, YUNA uses a modified DSL (Domain Specific Language) called “YUNALang”, which is optimized for dashboard creation and offers countless convenience features. With it, dashboards can be created quickly and with little effort on the one hand, and defined with pixel precision on the other. A customized interface almost as fast as off-the-shelf.

With 1.30, YUNALang replaces the previously used YUNAML. This makes creating dashboards even easier. If desired, the individual components can be configured via code and then rolled out on the corresponding YUNA instances – afterwards, the rights role management takes over the display of the dashboard components. 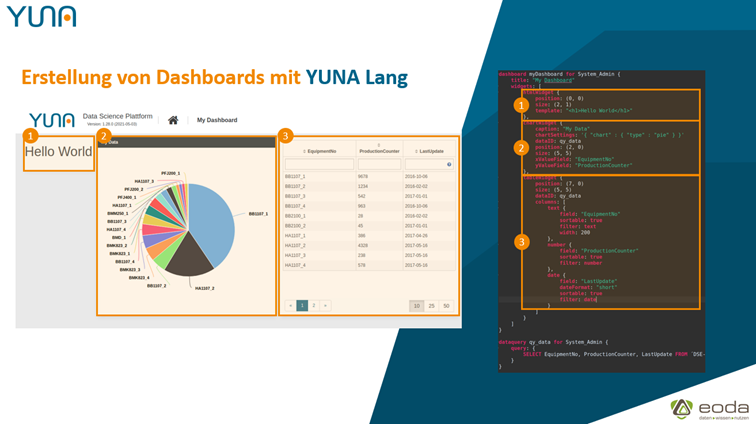 The core of any AI system is a model. In order to achieve the desired results (such as reliable forecasts) on a permanent basis, it must not only be fed with prepared data in advance, but must also be continuously provided with feedback on the output results. This is exactly where Result Rating comes into action. Wherever analysis results are presented, the expert can now also evaluate them in terms of plausibility. All that is needed to continuously optimize the model is a simple “true” or “false” evaluation of the individual results.

In order to further improve the intuitiveness and convenience of this function, the prerequisites have now been created to couple the result rating widget with other widgets such as a table or chart widget. This means that from now on, the respective table entries, graphs and ratings no longer have to be selected separately, which has significantly reduced the number of clicks required for navigation. In addition, even filter settings and sorting are transferred to the rating options available for selection, so that manual matching of the results to the associated ratings based on numbering is no longer necessary. 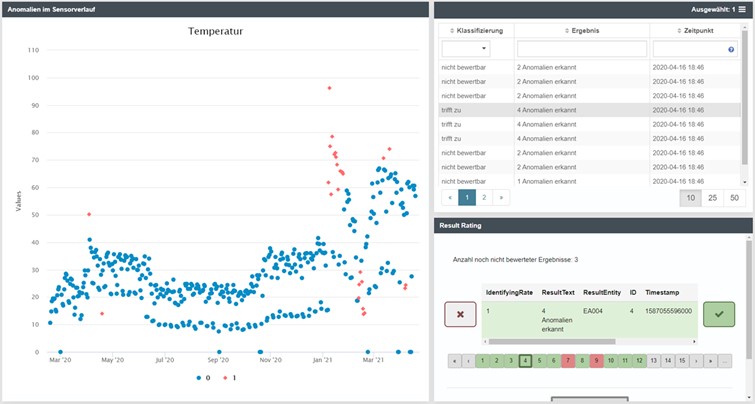 YUNA filters are based on the rights/roles concept, just like the dashboard elements. This means that dashboards can be set up precisely so that users see exactly what is relevant to them.
The filters can also be saved and shared with other users and teams, so they don’t have to be configured from scratch each time. The time saved can then be used for further analyses or the development of new questions.
In YUNA, a distinction is made between two filter systems – the classic filters and the pre-filters. Classical filters work as you know them from everywhere: they are applied to the respective data set in the dashboards.

Prefilters are a kind of filter preset – they can be configured in advance and are assigned to specific groups. In this way, the dataset is narrowed down to a certain type, e.g. to certain machine models or sales channels, right from the start.
A new feature is that several filters can now be combined into a pre-filter using an OR operation.
Prefilters can now also be created and updated via REST API.

The DataID can be used to reference not only individual objects and entire queries from the database – this makes it faster to create dashboards and even easier to use YUNA features.
In the new version, we have tightened the screw of the server log: Now users get detailed information in the log if a DataID does not exist or is incorrect:

Where is what? The dashboard overview

The desire to forget – or remember: “Stay logged in”

.
So that users do not have to log in every time, there are RememberMe cookies. Often these cookies are active all the time or deactivate after a session.

This period can now be configured individually in YUNA – 30 days is set by default. For example, it can be used to identify whether a user is still active.

The functional core of YUNA, our CORE API, has been hardened even further. From now on, all roles, with the exception of the system admins, have read-only permission. This means that all processes can still be viewed at the same time, but are protected from changes.

The CORE API controls all central processes in YUNA. It can be used to control the individual modules such as user administration, analysis jobs, the event triggers and authentications.

In the new version we have, among other things, simplified the script manager. Analysis scripts can now be filtered by name. Furthermore, the YUNA standard filters are no longer displayed in a resolved way, which makes the overview much slimmer.

For the “GenLinks” function there is now a dedicated option whether these links should be opened in a new tab or the current window.

Data Scientists and users move even closer together

The stage is set for the new Messenger function. Not only can it be used to receive system messages, users can also send information directly to each other as a message within YUNA. This eliminates the need to switch to third-party applications to exchange and/or pass on information.

In the current version, the interface is already implemented and can be activated in the configuration file. 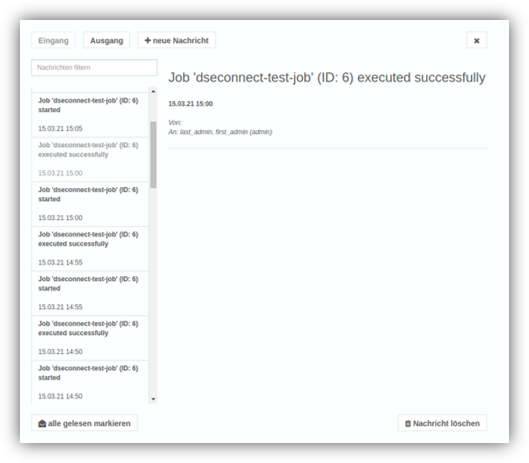 Training models on the fly

Generating training data has been a major challenge until today. With YUNA this is now done in passing. In every dashboard the result rating can be integrated directly. Thus, the user has the possibility to generate training data by rating the results on the spot of the result presentation. Your results will improve significantly due to the better data basis, if you take it up again in supervised models. 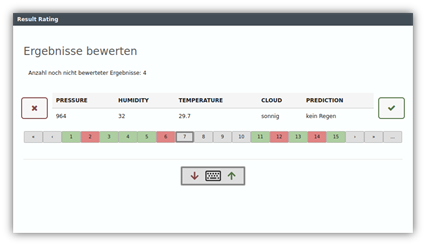 An automated deployment of the analysis scripts is realized in YUNA with an attached Git repository. Now it is possible to define a specific branch. Thus, different stages (development, test, productive) or the deployment of different models on different YUNA instances can be realized via the different branches. 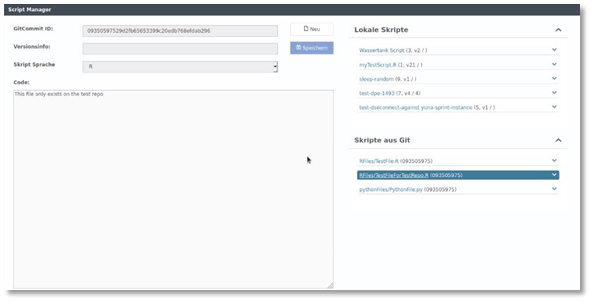 What happened to my analysis that was supposed to start at 11:00? Why can’t I find myself in the log? We have answered these and other questions with a new convenience function. In complex contexts, analysis jobs can start at different times than originally planned, e.g. due to dependencies on other jobs.
In the new version, the system overview now shows the planned as well as the actual start of each analysis job, in order to better plan the maintenance of the YUNA instance.

Scripts for productive analysis jobs are managed by YUNA. Whether for ETL, data preparation, ML models or visualizations: Adjustments to the scripts as well as their results – for example through input from business users or end users – should be traceable at any time through good documentation. As of YUNA 1.24, it is now possible to connect a Git repository and synchronize it with YUNA.

YUNA users can thus – depending on their authorization level – access the Git repo of the data scientists and create scripts for the respective phases of a workflow from development to test to production. Git integration in YUNA makes sophisticated data science script deployment scenarios less error-prone and significantly easier and faster to implement.

In YUNA, the user can schedule the execution of each analysis in analysis jobs. In doing so, YUNA automatically controls the ranking of the respective scripts in a schedule. As of YUNA 1.24, the exact start time of a queued job is displayed. By improving traceability, the update or restart of a YUNA instance, for example, can be better planned without interrupting the run of a relevant analysis job.

YUNA offers the possibility to define optional cyclic routines for the system in the system settings. These have been extended in YUNA 1.24 with an additional action that allows the administrator to clean up the generated logs of analysis scripts in a defined time window. Thus, system resources are conserved and the overview is increased.

In YUNA, a dashboard is defined by YUNA’s own description language YUNA-ML, which is based on XML. For publishing, the respective script is parsed, validated and the result is finally logged. The logging has now been revised and made clearer to simplify the development of dashboards.

Releases from the year 2021

Releases from the year 2020

Releases from the year 2019

You would like to experience YUNA live?
Request demo.