Variance in electricity production and consumption

On the consumption side, in addition to residents and local businesses, seasonal tourism and the operation of ski facilities, including snowmaking equipment, are particularly significant consumers. In addition, e-mobility is a new component that makes it even more difficult to forecast and control cost-intensive consumption peaks.

The EMU prepares a daily day-ahead forecast for the EWA EnergieUri. By contract, a free quantity for the deviation is regulated. Everything above this free quantity is sanctioned. A massive increase of this sanction is in the pipeline.

The forecast and thus the deployment plan of the power plants was previously carried out by an experienced operations manager and with the help of a complex Excel sheet. With the retirement of the employee, EMU will lose this operational experience and knowledge at this system-critical point.

The additional PV production as well as the e-mobility expansion make manual creation impossible in the future due to the once again significantly higher overall complexity.

For future schedule compliance and peak power control, the key elements on the power production and consumption side are to be controlled by a central intelligence.

The use of artificial intelligence is intended to increase the accuracy of the schedule forecasts, which are becoming increasingly important due to the threat of sanctions, while at the same time absorbing the loss of specialist expertise as complexity increases.

The data science experts at eoda, part of VIVAVIS AG, which specializes in digital infrastructures, have taken on the development of the AI system for the automated creation of the schedule. 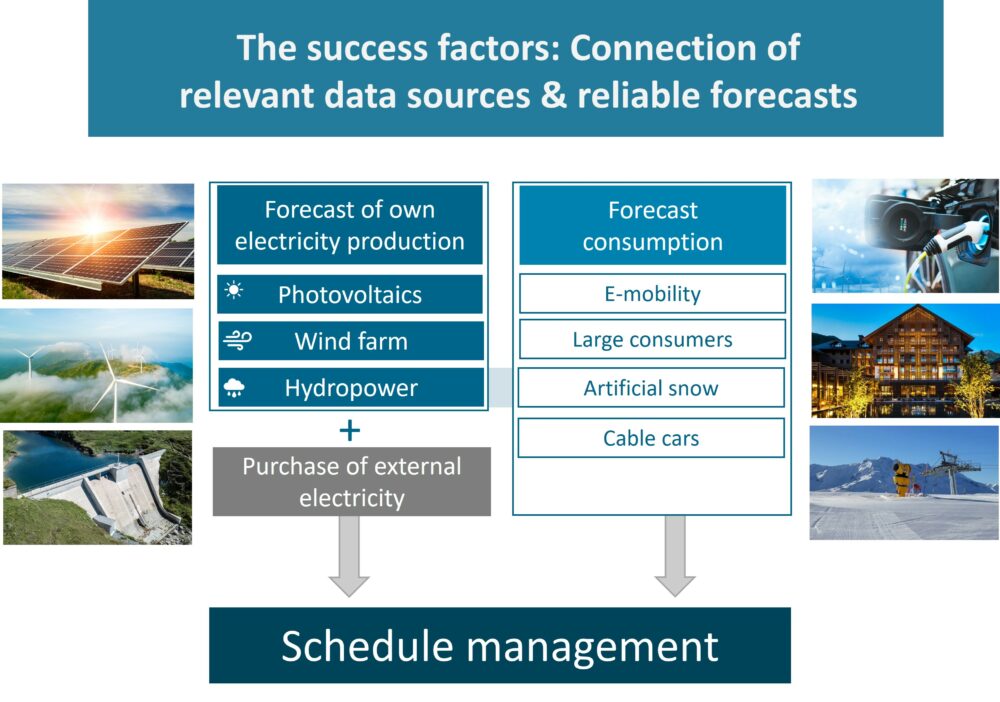 For this purpose, the AI system brings together all important information from power generation and consumption. For the ¼-hour schedule forecasts, in addition to the historical generation and consumption data, external information such as the current weather data (wind strengths, precipitation amounts, temperature, etc.), public holidays, and information from the areas of snowmaking and e-mobility are also included. The last in particular to avoid unforeseen load peaks when arriving tourists want to charge their electrified vehicles and at the same time the ski slopes would have to be artificially snowed.

The system also helps to find the optimal periods for electricity sales or storage with reference to future consumption and price developments.

The system takes over the schedule management either completely independently or in cooperation with a specialist who controls the planning. If important facts such as revisions or non-availabilities are already known in advance, they can be stored in the system and then taken into account by the AI for schedule formation.

eoda’s own solution as scheduler for the forecasts

For the automatic, cyclical execution of the forecasts in the 15-minute time window, eoda offers its own solution YUNA.

In times of increasingly volatile electricity production and demand, with the simultaneous advancing digitization of infrastructures, artificial intelligence can be a central building block for the schedule management of the future. In this context, AI can help to transform the existing flood of information into reliable forecasts, thus making load management more intelligent and automating work steps at the same time. Particularly in times of a shortage of skilled workers and the widespread departure of experienced employees, self-learning algorithms close any gaps that arise.

50Hertz can use the data science models we provide to forecast more accurately how high the grid losses will be for the coming day and thus compensate for the amount of electricity on the exchange more cost-effectively.

Through the consistent use of data, PV systems can be planned and operated more efficiently and reliably. As a result, they contribute even more to a sustainable, secure and cost-effective energy supply.

Case Study: Predicting the price of electricity with text mining

Automated analysis of current news reports for forecasting the development of electricity prices.

Data Science Projects: From the idea to productive service!

Which use cases are particularly purposeful for you? How can knowledge creation succeed in your company? From the solution idea to the productive use of AI systems in your company: We create perceptible added value for you from data.

You can also use AI for your schedule management – we will support you.