Everyone is talking about agile software development – we are also committed to the agile manifesto. In close exchange with our customers and through the experience which we gain in our projects, we continuously develop YUNA in short four-week sprints – or sometimes in shorter cycles.

A nice sign, especially in times of Corona, when the team plays together so well and manages to follow the self-imposed roadmap! In the new version several features have been added and improved. In addition, we are constantly working on a better overall performance.

Everyone is talking about agile software development – we are also committed to the agile manifesto. In close exchange with our customers and through the experience which we gain in our projects, we continuously develop YUNA in short four-week sprints – or sometimes in shorter cycles.

A nice sign, especially in times of Corona, when the team plays together so well and manages to follow the self-imposed roadmap! In the new version several features have been added and improved. In addition, we are constantly working on a better overall performance.

Improving system performance
With YUNA we give users the possibility to analyze comprehensive data quickly and directly and also to use it for process automation.
To improve system performance, we have created the possibilities to define both a global (i.e. system-wide) and a use-case dependent maximum for data queries. These limits can be configured by administrators. In the spirit of transparency for the user that the result range has been narrowed, this limit is also displayed in the Table and DataGrid widget. In addition, the update pays in preparation for the upcoming implementation of a lazy loading functionality in the DataGrid widget.

Through the IO channels, the individual widgets communicate with each other, i.e. exchange information and react to each other. By introducing the global and user-defined maximum, some changes have also been made to the IO provider:

In YUNA, data from databases and scripts are assigned to a unique ID. It is the link between the widgets – complex processes can be displayed and implemented more easily. In this course there are some breaking changes:

The DataGrid widgt is used to display tables in YUNA. It enables various functions such as export and direct visualization in the form of distinguished charts.

The form widget is used to display forms, or input fields.

Even more secure: Encryption of credentials used in scripts.
To connect third-party systems such as Jira, Microsoft Dynamics, etc., it is often necessary to store access data in scripts. In order to protect these from being viewed by third parties, the corresponding access data is henceforth stored in the database in encrypted form. The decryption, which is only possible within scripts and thus never leaves YUNA, is done using the individual key of the respective YUNA server.

Optimization of the tracking of faulty and aborted analyses.
If analysis executions are aborted in YUNA, e.g. due to technical problems or due to incorrectly selected parameters, temporary data is always stored for later tracking in order to better analyze potential errors. Over time, however, this data can lead to greater memory consumption on the executing system.
To keep the system permanently clean, this data is stored with the new version in the operating system’s temporary directory so that the operating system’s comprehensive memory management mechanisms can be used to clean up the temporary files.

Continuous improvement: Smart logging
System logs are often confusing, long text files. Basically, there is always the conflict between completeness and clarity with log files. While there used to be numerous errors in YUNA, which were mostly classified as ERROR regardless of criticality, we have now given users the option to choose different log levels:

This way users can directly see if a reported discrepancy requires an administrative action or if it should just be a hint. In addition, different log files can be created for different user groups, which leads to faster error identification.

Even more secure deployment of dashboards

With YUNA Lang as markup language it is possible to develop own dashboards in YUNA or to adapt existing ones. With the new version, we have further improved the VSCode extension so that YUNA Lang now officially has the status “Ready for Production”. New features include the following:

With large tables, the overview can quickly suffer. However, a special focus of YUNA is to make it as easy as possible for users to get an overview when working with a lot of information and data.

In version 2.5 the DataGrid widget, which is used to display tables, gets the possibility to group columns that belong together, e.g. thematically. In addition, these grouped columns can be expanded or collapsed, so that you always have as much information in view as you need at the moment.

Simply extend existing data sets
Imported data sets for further processing often have a disadvantage in common BI and analysis tools : they are rigid and almost unchangeable. It is often difficult to add updates or new information. And if they are, the updated records are stored as a separate copy to be merged with the original record. In YUNA, data records are virtually mirrored and can be extended by manual entries, similar to versioning:

The new function opens up further possibilities in addition to the actual input of new values: For example, the data in the tables can be labeled or annotated by an additional column.
Through the internal filter logic [LINK] in YUNA, these data sets can then be used directly in the Workflow Manager for new analysis models or are used in existing models.

In tables are often information carrier No. 1 and represent many values – especially with similar values and content, the overview can be lost here. As an additional quality-of-life feature, we have simplified conditional coloring of tables. The DataGrid widget, which is used to display tables in YUNA, automatically colors the background and/or text color of the cells according to the selected settings. 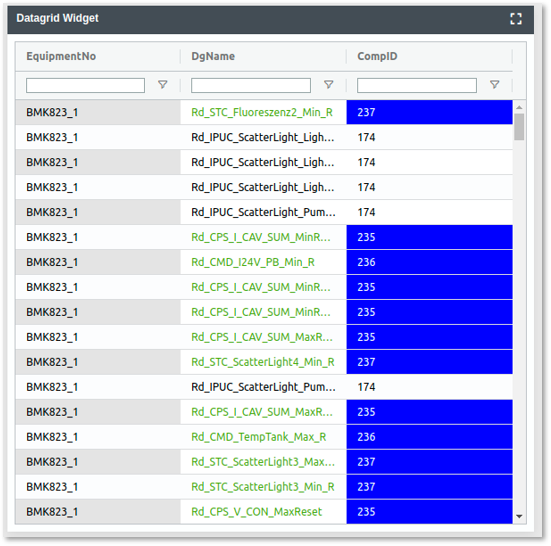 Internationalization
In YUNA, different locations / teams but also individual people can collaborate on the same database. For this purpose, YUNA offers different language variants. In the new version we have extended the internal translation logics.
Thus, filter sets [LINK], which are created by the users themselves, can now also be provided with corresponding translations. This way, not only newly created filters, but also existing filters for other languages can be displayed in a meaningful way.

Automated deployment & delivery of YUNA Lang
With YUNA Lang, dashboards can not only be created in YUNA, but also existing dashboards can be customized. There are two different ways to do this:

A VS code extension has been made available for the former case. With this tool, all other existing VSCode extensions are also taken over during deployment.
For the second way, a corresponding CLI tool has been created, which simplifies the automated rollout of dashboards.

Function update of the Imageviewer
With the Imageviewer you can display images from the database in YUNA. Newly added is the possibility to create a direct association of the images with the information from the tables.

The filter system is an elementary part of YUNA and goes far beyond the common understanding of sorting/hiding information as known from Excel or in online stores.
The filters in YUNA “communicate” with the dashboards, they keep their settings even when switching to other views/dashboards – so you don’t have to select the same categories every time you want a different perspective. Also, the filters can be linked, changed and saved, as well as further customized via “wildcards” i.e. placeholders.

Also, these saved “filter sets” can be easily shared with others or used directly in the creation of new dashboards or even the development of entirely new services. So from a classic BI view, the filter can be used to design a new use case if, for example, a different analytics model is to be used – shortening the development time of individual use cases.

For clarity, we have opened the API that manages the YUNA filters. All information used in the respective filter can now be viewed directly.

YUNA enables users not only to quickly grasp information through visualizations, but also to execute and manage the underlying models without relying on a data science background. This execution (cyclic or manual) is controlled via jobs. Along the workflow, jobs contain information such as specific parameters, execution times, responsibilities and filters.

With version 2.1 it is now possible to duplicate jobs very easily. This allows you to quickly create new jobs or quickly adapt them for new/different use cases. At the same time, we have extended the job overview so that the corresponding phase of the workflow in which the individual jobs are located is displayed there by default.

With the new version, all internal as well as external structures are now based on Java 11. In the course of this major update, many changes have occurred “under the hood”.

We have used the opportunity to optimize YUNA even further. For example, the internal structure is now even more intuitively divided between backend and frontend, and various packages such as OSGI, jettys and JAX-RS have also received upgrades. In the course of this restructuring, we also immediately paved the way for further comprehensive changes – allowing us to implement our vision of YUNA even faster.

Currently we are working on

We are looking forward to the future and the new possibilities to transform data-driven intelligence, competence and decisions even better into tangible added value!

In the new version we have introduced the DataGrid Widget, the successor of the Table Widget. In addition to significant performance improvements in the dynamic display of large data sets, the DataGrid Widget brings the foundation for a variety of exciting new features to the application:

The new DataGrid also offers the possibility to visualize data directly from the table! To do this, simply select the desired cells, then right-click to choose a suitable chart type, which can also be modified afterwards. Accordingly, progressions but also correlations can be recognized even faster – of course, these diagrams can then be shared again with other YUNA users or exported.

A simple example:
To display the worldwide machine status of each machine with associated total costs in a condition monitoring portal, all relevant functions such as location (via GPS coordinates and contact addresses) and machine generation can be displayed in the table. Using YUNA, additional information such as machine configuration can now be displayed in a new column directly in the table via a filter widget. The total costs, can then even be changed in different currencies on a daily basis (the calculation is automatically performed in the table), which simplifies international communication.

Prefilters are collections of certain filters, which, for example, narrow down the database to the data relevant for the corresponding groups – without setting up separate data pots.

From now on, the various individual pre-filters will be automatically assigned to the corresponding users.

Releases from the year 2020

Releases from the year 2019

Jump start now – we will walk you through it!